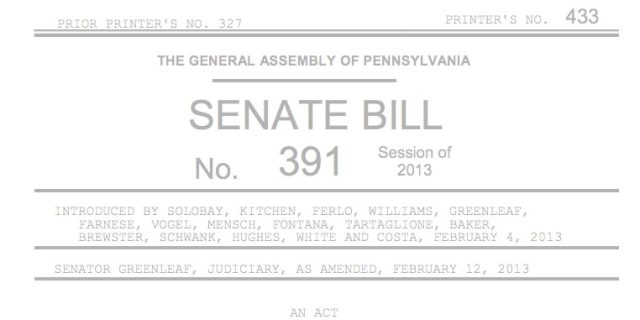 The bill lists certain offenses that are not eligible. Those offenses are:

In addition to the listed offenses, the proposed law does not allow expungement for any person convicted of an offense punishable by imprisonment of more than two years. Since 30 Pa. Cons. Stat. section 923(a) lists the permissible punishments for first degree misdemeanors and felonies as more than two years, anyone convicted of a offense categorized as a misdemeanor of the first degree or any felony would not be able to expunge any offense, even if the other offense was not a misdemeanor or the first degree or a felony.

Moreover, the bill protects against habitual offenders. The proposed expungement law would not allow an offense to be expunged if the person has been convicted of four or more offenses that are punishable by imprisonment of one or more years. Since misdemeanors of the first and second degree and felonies are punishable by more than one year a person would not be able to expunge an unlimited number of offenses. Therefore, even if an individual meets all the other requirements to expunge a third degree misdemeanor, the person would unable to if they had four misdemeanors in the second degree.

Christopher Benard is a Pennsylvanian resident and an avocate for personal freedom. He is an editor for ExpungementPA and regularly contributes to other legal informational websites. By Christopher Benard Google+